My recent (rather lengthy) bout of writer’s block has been caused by the overwhelming stress of  hiring (and then almost immediately firing) a crazy, irresponsible, spoilt, arrogant and quite frankly useless au pair… 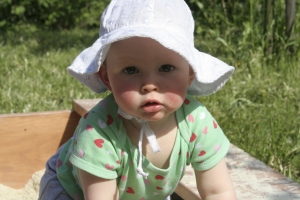 Or rather, it’s down to me being so traumatised by the whole event that every time I try to write about it I just can’t get it out.  I wanted to do a “hilarious” look at the stress she caused our family: amusingly recounting all the crazy things she did in the 6 days she was with us (yep, 6 days!!! and she only worked for 3 of those days!).   It was going to be called “50 reasons to fire your au pair (and these ALL happened to us!)“.  I was not having a problem finding 50 things to list, that’s for sure.

But each time I tried to put it on paper it turned into a fitful, un-editable tirade which made me look nearly as crazy as her.  So I’ve given up on that post, at least for now.  One day I will tell you all about it, but in the meantime, all you need to know is:

So we got rid.  Incidently, I found out after she had left that she had previously suffered from ‘psychotic episodes’ and delusions which led to her being sectioned for three weeks, and in hospital for a further three months because of her mental health.  She failed to mention any of that.   But hey!  she’s fine now, apparently.  As long as she keeps taking the medication.  This is no joke.

(Alpine Au Pair, if you’re reading, you have a right to reply…)

So this post is about my NEW life sans au pair – it is not a morbid reflection on how bad it was when she was here. 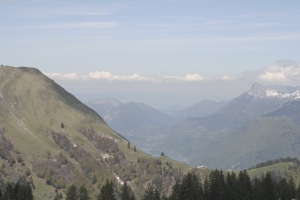 A positive look at things

I thought you might therefore be interested to know what a day in the life of Alpine Mummy is like, now that she is back to being a high-flying City lawyer (ahem), albeit one who works in her jogging bottoms…  I find it’s always fun to read about other people’s chaotic lives, if only to make yourself feel better… Don’t be shy, read on!

I work three days a week – mostly from home but every other week I spend two days (one night) in London.  The commute is a bit of a killer, but it’s worth it to stay here.  One day I’ll post all about how I’m surviving my London trips.  In the meantime, my working days at home go a bit like this:

I get rudely awaken at 7.30am by Alpine Boy jumping on my head and Alpine Papa dumping a wriggly (usually wet and smelly) baby on my stomach.  It’s pitch black in our room with the shutters closed, and when they’re wrenched open by an excited, screeching four-year-old (at what age do they start enjoying lie-ins please?) and the light floods in, it feels like I’ve been hit in the eyes with a hammer.

I hate waking up, can you tell?

Alpine Papa leaves with the kids at 8.20, so we spend the next 50 minutes in a whirlwind of faffing, feeding, flapping and freaking out.   We never pack the kids’ bags the night before, that would be too easy, and obviously we can never find anything we need at 8.15am (especially when the things we need include plastic bottles filled with gravel, and seeds for the school garden…).

We rush around, we scream, the kids are never dressed even by 8.15, and Alpine Boy never seems to have any clean pants.  And then, with shoes on the wrong feet and a slam of car doors, they’re gone.

The dust settles (literally – I don’t get much time for dusting these days), the cat comes out of hiding, and I finally have time to make a cuppa.  The house is usually a total tip, and I regret not having done the washing up the night before.  Rolling my nose up at the dirty plates and the stinky dregs at the bottom of  various wine glasses, I grumpily stack the dishwasher, clean the kitchen (a little bit), feed the cat (finally – she gets rather ignored in the mornings), get something out the freezer for dinner (if I remember), and then at 8.45 I make that long, demanding commute to work.

30 seconds later (ha) I’m at my desk (having spent 20 of those seconds moving the three-foot pile of clean washing from the desk to the bed – I guess that explains why Alpine Boy never has any clean pants).  I tend not to move for a while – the house is silent, there’s no-one to distract me, and I’m far more productive than I ever thought I would be at home alone.  Distractions are minimal in fact – limited to a couple of annoying cold callers from Senegal (I don’t understand them and am fed up of them ringing, so just hang up); a spot of eagle-watching from the window; or the cat doing a smelly crap in her cat tray (so smelly that it infiltrates through the house and ruins my concentration  – I then can’t do anything else until I’ve cleared it up.  Thanks Millie).  What else?  Nothing really, I just work work work.  Gosh, who’d have thunk it.

I get a bit depressed at lunch time eating on my own in a silent house so tend to eat quickly and then do much more exciting stuff – like cleaning the kitchen (again?! HOW did it get messy again in the four hours I’ve been working, when there’s no-one else in the house?!), cleaning the lounge, cleaning the loo, dusting (no, that’s a lie), cooking dinner, putting the washing in the machine.  I am so cool.

If it’s sunny (and it rarely is these days – it’s the worst spring for 30 years apparently, hurrah), I make plans to go for a quick lunchtime walk in the hills.  I have never actually gone.  I have however spent a nice sunny lunchtime falling asleep in the hammock.  Much more fun. 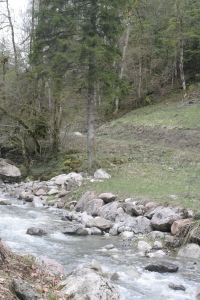 A walk I could do at lunchtime. But I don’t.

After lunch its back to work.  Not much else to say about that really!   Alpine Boy describes my day better thqn I ever could – he said he wanted to go to work like Alpine Papa and I do.  When we asked him what that meant, he patiently explained that going to work means you “talk on the phone, send messages, and copy things on the computer”.  He got that spot on.  Genius.

And then, at 6.30pm, all hell breaks loose.  It is the same every night – I simply don’t learn.  Firstly I pick Alpine Boy up from after-school-club – he is knackered, grumpy and always the last one to be picked up.  I bundle him into the car and head to Alpine Girl’s childminder’s house.  Luckily the angel childminder has usually fed her, and if I’m even more lucky Alpine Girl will have done a massive poo only ten minutes before, thus limiting the chances of me having to change a stinky nappy that night.

Usually only about 75% of those tasks get done – but that’s OK because (unlike my au pair) I do manage to feed the children.

Alpine Papa is home any time between 7.00 and 7.30, by which time I’m usually tearing my hair out.  If I haven’t been outside all day I will usually seize the opportunity of having another adult in the house to, well, to do the mature thing and run away.  Even if it’s raining I just pull my hood up and my boots on and head out into the hills for a walk – I breathe that fresh mountain air (taking care not to walk in that fresh mountain cowpat), let my muscles stretch and my sanity recover.  By the time I get back, the house is warm and quiet, I am calm and collected, and it’s time to snuggle on the sofa in front of the TV.  We ignore the ton of washing up, just turning the lights off in the kitchen so we can’t see it.  I know I’ll regret it in the morning but hey, it’s 9.00pm and there’s a whole series of Mad Men to watch (thank you Becci!! xx). 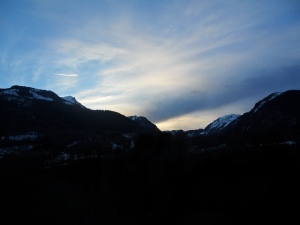 A dusk walk to calm me down

By 11.30 I’m pooped and so it’s upstairs to bed.  I spend a good few minutes moving all the clean washing from the bed to the desk, wondering why I never actually put it away (or at least find a less annoying place to store it).  I can’t get to sleep without reading so, even though I’m knackered, I always seem to spend at least the next hour not being able to put my book down.  Alpine Papa is snoring contentedly beside me, and eventually I give in and lie down.  As I close my eyes I remember the wet washing that has been in the machine for two days now.  And the dirty lunchbox in Alpine Boy’s school bag.  And the fact that he’s supposed to be presenting his favourite book at school tomorrow, and he has yet to decide what his favourite book is this week.

Oh well, I’ll deal with it in the morning…