Well going back to work certainly changed my life.  I only work three days a week (albeit in another country twice a month, with a 6-and-a-half-hour commute).  It’s not much at all, really, but it’s as if a little Time Fairy has sneaked into my life and brazenly stolen all my ‘me’ time.

I used to have ‘me’ time, I’m sure.  Maternity leave last year now feels like a perfect dream (though I’m sure it wasn’t always) – gallivanting up and down mountainsides with a baby on my back and a camera round my neck.  I had time for stuff like that!  And I still managed to cook fresh meals for my family, clean the house (from time to time. A bit. OK, let’s not exaggerate…), see my friends, and even write blogs.

(I’d love to know what that damn fairy has done with it that time.  If I found her stash I’d make a fortune.)

These days I’m lucky if my children get to eat pasta pesto or fish fingers less than three days in a row.  I haven’t seen the sofa for a good few weeks – I think it must be buried under that pile of jumpers, books, DVDs, toys, handbags and letters from school demanding lunch money, but I couldn’t be sure.  Despite the constant running of the washing machine and the fact that the house resembles a laundry, no one’s ever got anything to wear, and I’m so disorganised in the mornings that Alpine Boy regularly goes to school without gloves or a hat.   Usually when it’s -10°c .  I’m such a great mum. 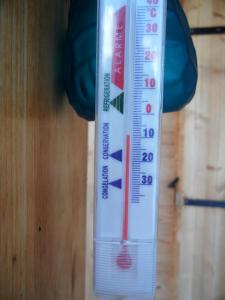 And I have no time to write blogs!  The little ‘me’ time that the Time Fairy has begrudgingly left behind is generally spent crashing on the sofa propping my eyes open with matchsticks – I’m in no fit state to talk, never mind write.  (I just want to mention that it’s not pure laziness on my part, all this exhaustion… there’s a real reason, see below…).

So my lack of posts recently (ok, for months) doesn’t mean I’ve got nothing to say (as if).  Au contraire, mes petits, I’m sure you all want to hear about my exciting life of working, washing and not so much walking!

Here are the ‘best’ bits then.  Here are 5 posts that I would have written had I been bothered/had the time:

So let’s get the obvious one out the way first. The latest addition to the Alpine Family is on its way – Alpine Baby is due at the end of March!  Gosh.  The things I’d do for another year off work, eh… 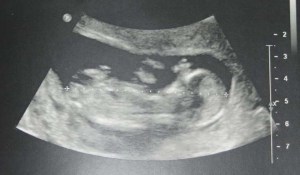 It seemed like a great idea at the time – recreate my perfect Alpine gap year –  but it’s slowly dawning on me that I won’t be quite so quick up those mountains with two babies strapped to me.  Going to give it a damn good try though – if anyone has any tips on the logistics of the whole ‘carrying two babies in the mountains’ thing just let me know.

No, really, I’m very excited about the whole thing!  All going well so far, apart from the aforementioned exhaustion (might have something to do with the fact I fly back to London at the crack of dawn twice a month for work – or at least I was doing until last week, when my French midwife found out what I was doing and nearly had kittens), and apart from my general grumpiness about missing out on a whole ski season (bad timing or what?!)

And I can’t wait to meet Alpine Baby!  9 weeks to go, ooh er.  I must say though that I am also starting to wonder how the hell I’m going to cope with more children than hands… I’ll keep you posted on that one.

This cat is yet again the bane of my life. I could rant for hours about this but it’s gross so I won’t.

She started weeing on the floor.  In the kitchen.  That’s all you need to know.

We tried everything, except taking her to the vets for some reason. Eventually we even tried that (and really only because I sent Alpine Papa to have her put down…).  Should have done so sooner, it turns out– she had a urine infection.  And diabetes. Joy.

So I felt too guilty to have her put down.  And now we have to inject her twice a day with insulin, and feed her special vet-approved food that costs even more than the Iams we used to have to import when she turned her fussy little nose up at Carrefour own brand.

Looking on the bright side, we don’t have much of a life these days, and so being at home to inject her twice a day is not too much of a chore. When we were young and carefree (remember those days Alpine Papa?!), living it up in London and actually going out in the evening, the same cat had her first case of diabetes. My friends would snicker in disbelief as we made our early excuses half way through a great night out, to make sure we got back before midnight to inject the cat.  In case she turned into a pumpkin or something.

So, in summary, she’s costing us a fortune again, this bloody cat, and she’s rather annoying.  But at least she’s stopped weeing on the floor.

3. How to put guests off ever coming again

Blog number 3 would have recounted the ‘hilarious’ tale of when my lovely lovely friend Sarah came to visit with her husband and baby in September.  It was a disaster.

I didn’t have any annual leave left and had to work for two of the days they were here, so they had to entertain themselves.  ‘Cause I’m a great host like that.

Alpine Girl didn’t sleep.  At all.  And seemed to relish the challenge of waking up Sarah’s baby, Alpine Boy and indeed the entire house.  (No-one believes that my daughter does in fact sleep like a dormouse most of the time, as she always insists on proving otherwise whenever we have guests.)

The bloody cat was still weeing on the floor.  Twice a day.  At least.

As it was September, the cows had already been brought down from the mountains and were residing next door.  But the weather was hot hot hot.  So there were loads of flies in the house. Loads.  Which just wouldn’t die.

Oh yeah, and I got lost taking them back to the airport (Sarah and her family, that is.  Not the flies).

But hey, I had a great time – seeing my beautiful friend and her beautiful family; drinking the lovely English tea she brought with her; snoozing in the sunshine; picnics in the woods; walks without coats.

Not sure they’ll want to come again though… 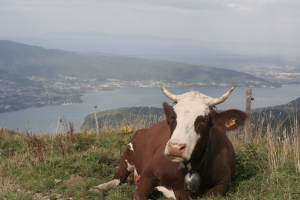 This next blog would have lamented about how old I’m getting (not really.  I’m an ever-youthful 33.  Though admittedly Alpine Boy thinks that’s ancient.  As I guess I did once).

I would have amusingly described my brilliant birthday, ironically remarking how it involved fresh air, a small glass of wine (pregnancy restrictions) and falling asleep before midnight, instead of smoky clubs, too many vodkas and stumbling home at dawn. How times change.

The day involved dumping the kids at school and the childminder’s and climbing a mountain (where I discovered a newly-established fear of heights. And cliffs. And ravines… I’m hoping it’s purely pregnancy-related or I’m in for a dull summer). We then did the unheard of thing of getting a babysitter in (woo!) and going out for a posh meal (double woo!). I’m sure I’m supposed to want to spend my special day with my beautiful children, but hey. I’m sure they didn’t mind (or indeed notice). And I got my glass of wine (sshhh, don’t tell my midwife). 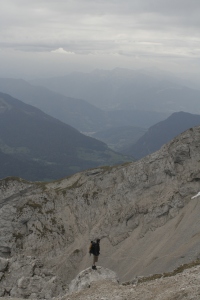 This now scares me. Which might be a problem, living round here…

The Tour de France came right past our village in July.  And what’s more, it was going uphill.

A peloton of cycling-mad friends therefore came to stay, and I spent weeks beforehand working out where we’d watch it, what time we’d get there, whether I could cope with the boredom of standing on the side of the road all day waiting for a few bikes to whizz by… (sorry.  Not a great fan of cycling, have to say.  Cue eye rolling from bike-mad Alpine Papa).

So I wasn’t expecting a great day.  But I’m a brilliant host (sometimes, honest…) so was prepared to get in the spirit of things.

We got our perfect spot – view of the mountains (for me); view of the bikes coming up the hill (for everyone else).

It was sunny.  ALL day.  Until the precise moment we arrived home.  Brilliant.

There was a bar.  A bar!  On the side of the road.  Pumping out cool music.  And beer!  ALL day.  We got to dance in the road.  Which the girls loved.  And ogle at girls in bikini tops.  Which the boys loved.

The portable TV amazingly worked so we could watch the rest of the race from the side of the road.  And we were back in time to watch the finish, safe on our sofa whilst the rain beat down outside.

Alpine Boy had the time of his life, and still talks about it when we drive past ‘our Tour de France spot’ on the way to the supermarket.

The day wasn’t even spoilt by lecherous drunken Dutchmen next to us, or by the obnoxious anti-gay lobby opening a massive offensive banner for the TV cameras.  Right next to our (rather easily identifiable) car.

And did I mention I don’t even like bike races?!

I’d been worrying about how we’d top it in 2014, but the Tour de France organisers have taken that out of our hands, by avoiding bringing the route anywhere near us.  I never thought I’d say this but I’m a bit disappointed really!  Roll on 2015. 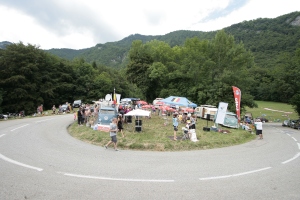 The dancing (did you think I was joking?!)

So that’s it.  Will keep you going for a while, I’m sure (it might have to – I’ve got another month and a half left of work before my maternity leave starts.  And I think I might be ever-so-slightly optimistic to think that the damn Time Fairy is going to give back any of that ‘me’ time once Alpine Baby is here…). 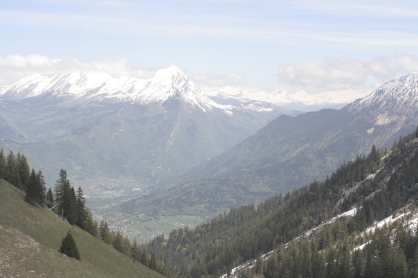 8 thoughts on “5 blog posts I could have written. But didn’t.”