The end of November 2013 saw the amazingly perfect wedding of my bestest friend ever.  No lie – it was really fantastic.  The bride was (of course) beautiful, the venue was amazing, the weather was gorgeous (in London, in November?! Not sure how she managed that but she did!), and her shiny new husband was certainly shiny and new in his rather fetching RAF uniform.  She put so much work into every little detail – she is a total goddess, my friend Helen, and her stunning crafty talents were on display in the most perfect fashion.  If you need a wedding planning and you want it to be amazing – call on her.

Don’t, however, call on me to organise any kind of travel plans to said wedding.  That will result in epic failure.  (What else would you expect from Alpine Mummy?  Helen and I are a strange match in that respect:  the things she touches turn to gold, whilst my faffing fiddly fingers turn most stuff to dust.  I’m not really sure why she stays friends with me – especially as it’s been this way since we met, nearly 18 years ago, and is unlikely to ever change…!). 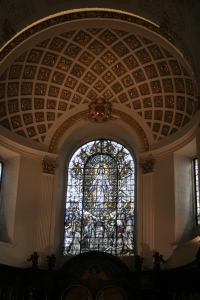 So, yes, as I said:  a perfect wedding.  Slotted into the middle of a disastrous weekend.  It went a little something like this:

I had the bright idea of combining the trip with one of my fortnightly work commutes.  Dead clever, that – given that I catch the plane at 7.00am.

Why would I ever think doing that with the entire family would be a good idea…?

An Alpine Family outing is a military organisation at the best of times (it doesn’t quite take us three  hours to leave the house anymore, but nearly…), but to top it all on this particular occasion it was snowing.  Big time.  First snow of the season and the weather seemed to be trying to prove a point.  It started on the Tuesday night and continued unabated all day on the Wednesday (the day before we were due to leave), as I helplessly gazed through the window watching the world get whiter and whiter.  Ordinarily I would have been beside myself with excitement about huge quantities of snow making an early appearance, but the only white I wanted to see that weekend was Helen’s wedding dress. 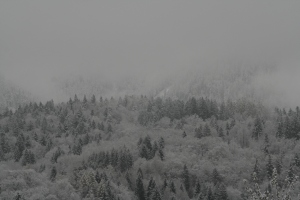 View from the window. (Yep – we’re due to leave at the crack of dawn tomorrow.)

We therefore decided to stay in a hotel near the airport to avoid having to get up at 2.00am to clear the drive of snow the next day (and, more importantly, to avoid missing the wedding…).

That night in the hotel was the night from hell.

Alpine Papa got caught up at work so we didn’t leave home until gone 7.00pm.  We had to get dinner on the way, and so didn’t manage to check in until 10.00pm.  Finally in bed, Alpine Girl (not used to co-sleeping) then took nearly two hours to get to sleep.   And spent that entire time singing, tickling us and pulling my hair, despite our stoic efforts to ignore her.  All very cute, but not so great in the middle of the night (perhaps I should change parenting tactics with Alpine Baby and encourage co-sleeping right form the start – so it’s not so exciting for her when we actually need to share a bed). Alpine Boy coughed all night. Alpine Papa coughed all night. And had a stomach bug.  Alpine Mummy was awake all night. And had to work the next day.

After a whole 45 minutes sleep (or at least that’s what it felt like), the alarm screamed in my ears that it was time to get up. Even though it was only 4.00am.  Alpine Papa was still sick, and so the tasks of packing, getting the kids ready and driving through the driving snow to the airport  all fell to me.  I was rather grumpy, to say the least.

We made it to the airport and through security in one piece (and even on time), but that wasn’t a taster of things to come.

Two minutes after everyone had been bundled onto the plane and the doors had been locked behind us, the captain announced that the airport had been closed. Yep, closed. Because of the snow.  Great.

They were clearing it and then they’d de-ice the plane but it would take a couple of hours. And we weren’t allowed off the plane in the meantime. AAAHHHH! I was prepared for 1 hour and 10 minutes on the plane with my rather excited children. No moe! And certainly not 3 hours! I didn’t have enough sweets – what was I going to bribe my children with?

Alpine Papa was really ill by this point and spent the next two hours asleep, while visibly pregnant ol’ me ran up and down the aisle with Alpine Girl, hissed a lot at Alpine Boy for kicking the seat in front, and generally tried (and failed) to maintain an illusion of calm.  I’m generally a tolerant person (honest) but I couldn’t help but blame Alpine Papa for being so inconsiderate as to get ill at precisely this moment. How dare he?!  (I’m entirely rational and reasonable, you see.  Especially at 7.00am after no sleep.)

Finally the snow was shovelled and the plane de-iced so off we went.  Which meant strapping Alpine Girl back into our seat, and thereby triggering an unstoppable tantrum.   Joy.

When we got to London I gave a quick wave to my poor family and legged it to work – by now feeling desperately sorry for this poorly man who had been left to cart a ridiculously large suitcase, a buggy and two irritable children on a train from London Bridge to the depths of South London.

We managed to spend the next two days in London thoroughly exhausting Alpine Boy in particular (who fell asleep getting his shoes fitted in John Lewis, having a hot chocolate in Costa, and eating dinner in Pizza Express ), and watching Alpine Papa getting sicker and sicker. He was so ill in the end he couldn’t even make it to the wedding (I did try to be sympathetic but didn’t enjoy traipsing across London in my posh frock and two kids on my own. OK, I’m a cow.).  He did manage to stoically make it for the evening, much to my genuine delight – I had really missed him all day (and not just because I had the kids on my own), 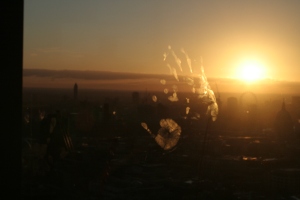 My children visited my office – can you tell? (Apologies to the office cleaners.)

As I’ve said though, the wedding was fantastic (congratulations again Mike and Helen, what a great day!).  Lucky really, because the painful weekend only got worse thereafter.

We discovered  at when we got back to the flat (at midnight) that there were no trains running from the local station the next day to catch our flight.  None at all.  We couldn’t book a taxi by phone as there as my kind host’s flat is probably one of the only spots in London without mobile reception.  None at all.  We could only get online taxi quotes, therefore, which were huge.  Being the tight sods that we are, we opted for a taxi just to East Croydon, leaving at 6am, from where we could get a train to Gatwick in time for the flight.

Problem solved, Alpine Papa had crashed out again.  I still had to pack (of course) and so didn’t make it to bed until about 2.00am, ready to get up at 5.00.  (I did actually wonder if it was worth going to bed).

Chaos in the morning of course.  No-one wanted to get up, least of all me.  About 15 minutes before we were due to leave I put some toast on for Alpine Boy, only to discover 10 minutes later that it hadn’t popped up and was, well, on fire.  Alpine Boy was sitting in a room which was entirely full of smoke not making a sound (we have since taught him about fire safety.  i.e. to SCREAM if there’s smoke, dammit!  He’s since been talking about fire engines a lot, so I’m hoping the message got through).

That gave us precisely 5 minutes to get rid of the smoke (I managed to pull the curtains off the rail in the process), make sure the smoke alarm didn’t wake up the entire building, leave a very apologetic note for my friend whose flat we had ruined (sorry Anne,  again), and get everyone and everything downstairs in time to get in the taxi.  Which turned up late.  Of course.

You’d think it would have to end there but we finally got on a train at 7.00, only for it to come to a complete stop two stations down the line due to an ‘incident’.  No more information than that, of course.  We sat there for a good half hour, Alpine Papa and I both outwardly calm but inwardly panicking. Eventually I started phoning round for taxis – a mission in itself as everyone else had had the same idea. Finally we found some random bloke in the Yellow Pages who was obviously still in bed but who promised to be there “in less than 10 minutes”.  Not believing a word of it we lugged ourselves and our bags off the train, fighting through the crowds of desperate travellers all fighting to get a taxi at the front desk.

And, would you believe it?  8 minutes later our taxi-driving knight in shining armour arrived. What a man. (I didn’t check whether he was still wearing his pyjamas.)  We arrived at the airport just in time.  Without a minute to spare.  “Stressful” doesn’t cover it.

In a final attempt to ruin the holiday, the Easyjet check-in man took great delight in telling us ou luggage was 2kg over weight.  And would therefore cost us an extra £40.  His smile faded though as I nearly broke down in tears as we hastily explained what a dreadful day we had already had, even though it was only 8.30am.  And you know what?  He let us off…

So yeah, moral of the story?  City breaks are great.  Weddings are even better.  Just don’t expect it to be an uneventful weekend if the Alpine Family is involved…