Alpine Mummy should be a parenting guru. Not because she’s an expert in parenting. But because she categorically is not.

My parenting technique may send shivers down the spines of Gina Ford groupies, and cause panic in Mumsnet forums but, really, it’s all for your benefit.

I should write a parenting manual in fact. It would be a sell-out, simply rolling off the shelves, like squishy poo escaping from an unchanged nappy (more about that later). By sharing terrible screw-ups in Alpine Mummy’s usual ‘aren’t-you-glad-your-life’s-not-like-this?!’ style, this new handy reference manual would produce perfect parents everywhere, as they rush to do exactly the opposite of what Alpine Mummy does. 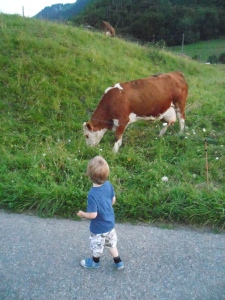 Don’t believe me? Perhaps a little taster of my terrible parenting would assist. Here are my top 10 recent parenting failures:

Passing through airport security with three kids brings the usual question: ‘Do you have any liquids?’ 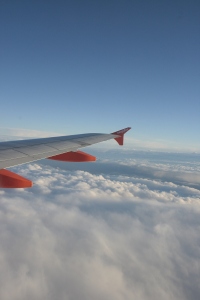 Let me set the scene. We’re on the terrace in a lovely Alpine restaurant (ready for our latest fix of cheese), surrounded by great friends, beautiful views, gorgeous sunshine, and cow bells dinging in the background. Of course. We’ve been on a walk, and no one has bothered checking Alpine Girl’s nappy for, um, a while. But it’s Ok; she’s happy, giggling away in her high chair.

Until one keen-eyed friend casually remarks… “eeeuuuww, is that POO leaking from her nappy?!?!”

(Yes, it was. No matter how much we pretended otherwise. Hey, a quick wet-wipe swoop and most people were none the wiser. Until now…).

We forget most things. The kids never have anything they need. It’s a miracle genuinely worth celebrating in our house on the rare occasions they get to and from school with their school bags; it’s unheard of that they arrive at school with that bag containing what they might find useful during the day. Like a coat. Or homework. Or even a pen. (Those bags will always have the important stuff in though: Alpine Boy’s will be full of stones he has collected because they look – and operate – exactly like daggers; Alpine Girl’s will probably have those important bank statements we have been looking for for weeks, with a treasure map carefully scrawled on the back.)

We forget coats when it’s raining, we never have sun cream or hats when it’s not. We forget skis and poles when we go skiing; we forget kids’ helmets when we’re on our bikes; and there are never enough car seats in the car. We’ve had picnics without sandwiches (having forgotten the bread), and the other day Alpine Baby had to walk round the shops barefoot because we forgot her shoes. No joke.

And I think that last week we forgot to go to Alpine Girl’s first parents’ meeting at school.

I say ‘think’ because we cant find the letter informing us of the date. It must be in a school bag. Somewhere…

Nursery nurse to Alpine Papa on Alpine Baby’s first day at her new crèche: “Don’t worry, I’ve worked here seven years and we’ve not had a single case of nits!”

One month later, Alpine Baby has infected the lot of ‘em, with some kind of nuclear-resistant super-quick-breeding monster nits which JUST. WON’T. DIE.

How they love us at that crèche… 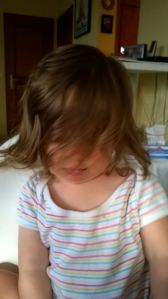 …with the sound of Alpine Girl screaming “but I don’t want to waaaaalk” as we drag her up and down mountains she really doesn’t want to be in. What cruel parents we are. 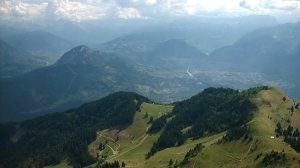 Nothing is more charming than coming home from a long day at work to find your gorgeous children sitting round the dinner table singing melodically.

Until you realise that they’re actually singing the Monty Python classic “Every Sperm is Sacred”. Yup, thank you Alpine Papa.

My children’s genuine response to the question “What do knights say?” is: “Ni” (another one for you Monty Python geeks out there. And any tips welcomed on how I now explain to my children that knights don’t actually say “ni”. I’m dreading the day when Alpine Boy comes home in tears having made a tit of himself in class in his enthusiasm to answer an innocent question from his History teacher…).

Alpine Girl’s favourite party trick is to cover her mouth with her hands and hoarsely whisper “I am your father”. It’s as if Darth Vader is right there in the room.

We love dancing in our house. Meghan Trainor’s “All about the Base” is a particular hit. But I can’t play it now if anyone is nearby – it seems to make all my children (including Alpine Baby) break out into a fit of completely inappropriate bumping and grinding which would make Miley Cyrus proud. I have NO idea where that came from; and I live in fear of being caught with nowhere to hide next time they play it in the supermarket…

But occasionally they surpass themselves in trying to demonstrate to the general public what negligent parents we must be. I still cringe thinking how Alpine Girl waited until we had boarded a crowded yet exceptionally quiet plane (full of awfully posh English expats), before beautifully (and loudly) emulating the legend that is Mr A. Swarzenegger: “Hasta la vista, Baby!”

No, she has not seen The Terminator either. I don’t think.

Unlike the other two (who never bloody shut up), Alpine Baby doesn’t talk. She has a few words she rolls out on very special occasions, like ‘miam miam’ when she wants food; ‘encore’ when she wants more food, and ‘dank yoooo’ when she finally gets yet more food. But the latest one, taught by her darling brother and sister, is to giggle loudly and shout ‘ooohhh pété!’. Usually in public, of course.

The kid has about four words and the loudest one is French for ‘fart’?!  I blame the parents.

Cue hundreds of comments about how ‘quick and easy’ it is to do a French braid every morning and how ‘guilty’ mums out there feel for ‘only’ doing a bun before school.

They should come to my house.

Alpine Girl refuses to have her hair brushed. Ever. And twists it when she sleeps so has actual dreadlocks. We keep Alpine Baby’s excessive amount of hair out of her eyes with a loom band. If she’s lucky. (And said loom band will usually stay in her hair for at least a week, until finally we get around to cutting it out.)

Bathtime is a rare occurrence in our house (it’s just too stressful); I ‘sometimes’ forget to brush their teeth; and they often have porridge welded to their earlobes or forehead. Three hours after breakfast.

If there are no clean pants to be found in the morning they wear yesterday’s; I don’t think they realise that socks are supposed to be the same colour; and Alpine Boy’s favourite pair of ‘shorts’ are actually a pair of trousers he was wearing when he was two (he’s now nearly seven…).

But hey, they’re alive. And happy. If a little wild. Presentation is overrated… 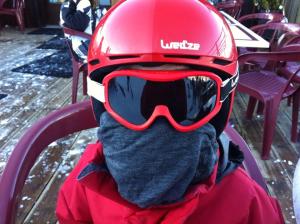 You know the rules – you spend all week working, so you are (by law) required to look forward to spending every other minute of your life with your kids.

Or, do what I do – go and work in a different country to the one you live in, so that the public holidays are entirely different to the ones your kids enjoy at school. You’ll be as annoyed as hell when you have to go to work on that Bank Holiday Monday when no one else in your house is getting their backsides out of bed, but it’s worth it for the sheer pleasure of being able to spend the entire day ALONE cycling or walking or shopping or sleeeeeeeeeeping when it’s your day off and your KIDS ARE IN SCHOOOOOOL!!! (Sorry, got a bit  carried away there…).

Perhaps don’t do what I do when it comes to speaking to the teacher, though: “Will Alpine Girl and Boy be at after-school care on Thursday? It’s a holiday in Geneva so many parents will be picking their kids up early…”

“Yes. My little darlings will be in after-school care. Yes, until the last possible moment I can pick them up. I have a whole day of cycling to fit in. And then some gin to drink. Yes, I know it’s negligent. Tough.”

When I do finally pick the kids up I like to do so clad head to toe in cycling gear – full lycra, padded shorts, shoes that make you walk like a duck, the works. Amazingly my kids don’t care – they’re too young to be embarrassed. Yet… (And I’m enjoying practising in the meantime.)

So there it is, Alpine Mummy’s parenting technique in a nutshell. Any agents out there ready to push me as the new Supernanny?  I could make you a fortune… 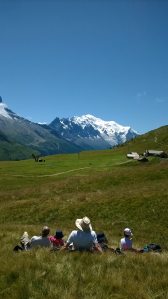